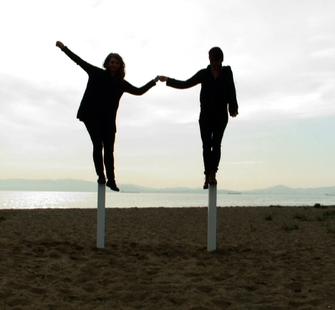 Have your love story turned into a romance novel cover painting by Elisheva Biernoff!

Send us a picture of yourself and a loved one posed as you'd like to appear in the painting—steamy, wistful, curious—anything from a passionate embrace to a touch, a gaze, or a smile.

Give the artist some details about your love story, such as characters, the setting, and the time period, then email them with the photo to info@montalvoarts.org. (By submitting, you agree to our Terms & Conditions.)

We will create a gallery of entries on our website, and Biernoff will select up to seven pictures to turn into original paintings which will be exhibited as part of her L O V E installation Special Edition. Subjects will also receive their own digital copy of the paintings!

What song did you first kiss to? Which love song played for the first dance at your wedding? Is there a song that speaks to you by evoking longing, romance, or heartbreak? We want your help with a musical playlist for ‪L O V E! Visit our Facebook page to give us your picks!

Less than 50 years ago, “the Summer of Love” was more than a pop culture fad: it aspired to bring about a major social and political shift in America. Today, however, we face a near total lack of public debate about love as the basis of connection, understanding, and acceptance in our culture and our communities.

Technological innovation makes it possible for us to be better informed about each other’s lives and feelings than any other time in human history. But is it deepening our connections with others? Or do cell phones, e-mail, and social media strip nuance from our communication and leave us lonelier than before?

Through installation, sound work, video, drawing, and outdoor sculpture, participating artists explore the bonds of friendship; the important role of empathy in our lives; the intersection between desire and new technologies; and the complex relationships between love, belonging, identity and community.