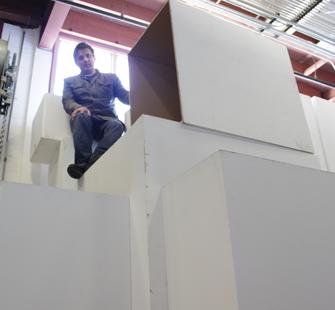 Andre Woodward was born in Newport Beach, California.  He resides and works in Costa Mesa, California. Woodward received a BA in Studio Art from UC Irvine, Irvine, California and an MFA in Sculpture from California State University, Long Beach.

Woodward’s work has been shown in alternative and traditional sites around California, including Southern California galleries, the Torrance Art Museum, and the Huntington Beach Art Center.  He has received a Hoff Foundation Grant and the 2011 Visions from the New California award.

Woodward is interested in biodiversity  and  complexity theory, and the unique balance they embody.  His sculptures attempt to personify the ecological facilitation between nature, technology, and humanity, using a mixture of manmade and natural materials.  His carefully composed objects highlight the urban environment in relation to the natural world.