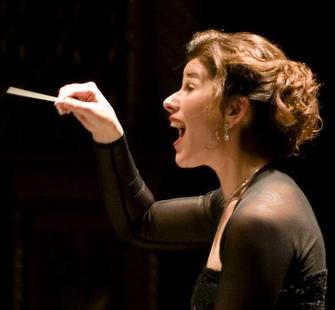 Elena Sharkova has been Artistic Director of the Cantabile Youth Singers since 2004 and oversees all educational and performance aspects of the program, in addition to conducting the top choirs, Ensemble and Vocalise. A native of St. Petersburg, Russia, Ms. Sharkova arrived in the Bay Area in 1998 to join the music faculty at San Jose State University where she served as Director of Choral Activities, conducting three choirs and teaching classes in voice, choral conducting, and music education until spring 2006.

In her 13th year as Artistic Director of Symphony Silicon Valley Chorale (formerly San Jose State University Chorale), Elena prepares and conducts the chorus in five programs each season at the California Theatre in San Jose.

Born and raised in St. Petersburg, Russia, Ms. Sharkova received a Bachelor’s Degree in music education and piano and subsequently a graduate degree in conducting from the St. Petersburg Rimski-Korsakov State Conservatoire. Upon graduation, she was appointed Chair of the Choral Department of the Preparatory Music School at the conservatory. There she conducted four children’s choruses (ages 3 to 19) and taught the innovative Ogorodnov Method to graduate conducting students. Elena is delighted to be working with young voices again, this time in North America! In demand nationally and internationally as guest conductor, clinician, master teacher, and adjudicator, Ms. Sharkova is a champion of Russian choral music: she has lectured extensively on its traditions and performances practices and premiered several contemporary Russian major choral works.

Elena lives in San Jose with her wine-maker husband, Tony Craig, and their eight-year-old son Sasha who is also a third-year chorister in Cantabile's Prep Choir.