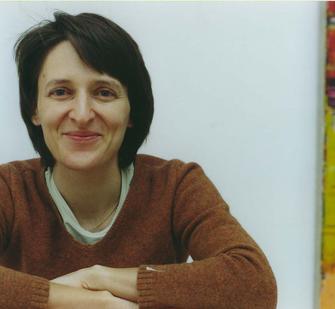 While teaching art to those of different ages in different institutions over the following ten years, she studied art science and literature/linguistics at the Universities in Basel and Geneva, concluding with a thesis on Josef Albers’ Interaction of Color.  Her interest in the wide field of art ranges from personal expression to the social and historical, as well as philosophical and economical meaning. She completed her postgraduate program on Cultural Studies in Berlin and Basel, in 1998, and 2003-04 respectively, by writing a research on company related art awards.

In her painting, Schmölzer focuses on the substantive properties as well as the interactive capacities of color. Her intention is to challenge the limits of color. As she generates greater subtleties in behavior and movement of the medium, the fluidity of the paint becomes structural. She uses the terms “modeling” and “pushing the color back” to describe her processes of application, spreading, washing off, and abrasion of pigment into and off the primed surface. Choosing oil paint for its luminosity, she studies how the layers of colors emit transcendence in their relationship to the shifting planes of dimension. She travels these spatial relationships with her innate ability to translate the boundaries between interior dialogue and imposed definition, between organic experience and applied order.

Since 1995, Schmölzer has been working regularly with different galleries showing her work in Europe and the United States. She has received grants from the Art OMI Foundation New York, the Helene Wurlitzer Foundation in New Mexico, and the Valparaiso Foundation in Spain.