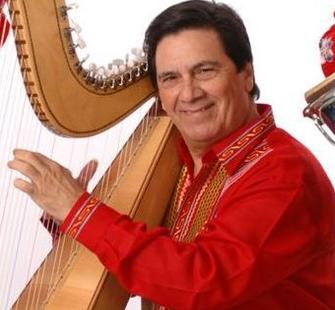 Ramón Romero is a master of the Paraguayan harp, dedicated to performing and preserving the musical folk treasures of his native South America. An international touring and recording artist, Ramón Romero is also a composer of more than 25 works, music that captures the essence of his homeland.

Ramón began playing the harp professionally at age twelve and built his first harp at age thirteen from guitar strings and an old window frame discarded during the renovation of the Presidential Palace in Asunción, Paraguay. Ramón studied harp with the masters, Rodolfo Ortiz, Pedro Gamarra, Fidelino Castro, and Severiano Gonzales. In France Ramón studied classical harp with Madame Jacquelinne Dumond Forestier and performed concerts with classical harpist, Véronique Ganté - Vogt. For nine years Ramón was the principal harpist for the France based ensemble, Les Guaranis, under the direction of Francisco Marin. For more than 30 years Ramón has performed for audiences throughout Europe, Africa, South America, and now in the United States.