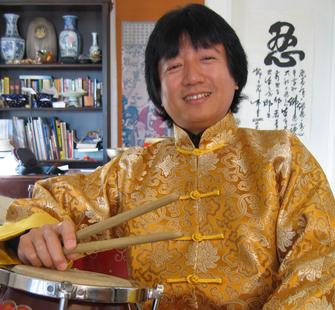 Bay Area artist Wang Wei has been a student of music since his early childhood. As early as 1973, his father began to teach him to play the yangqin, a traditional Chinese hammered dulcimer. Wei continued his music studies throughout secondary school at the Music Conservatory of China in Beijing where he practiced under the tutiledge of some of China’s best yangqin and precussion teachers.

In 1989, Wei enrolled at the Shanghai Conservatory of Music. He continued to study traditional instruments and also became increasingly interested in Western classical music. Upon graduation from the Conservatory in 1993, Wei joined a Chinese pop ensemble and began to perform and to record in Shanghai. A year later he collaborated with musicians from Germany, inner Mongolia, Nanjing, Chengdu and Hang Zhou to create an East-West fusion ensemble called Crossing. The group won first place at the 1994 Beijing Jazz competition.