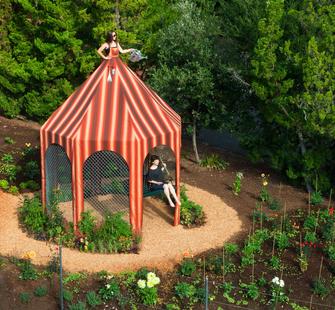 Bay Area-based artists Robin Lasser and Adrienne Pao have created an edible dress tent that acts both as wearable architecture and a living sculpture. Part of a series of Dress Tents that blend fashion, architecture, performance art and photography, Edible Dress Tent responds to iconic architectural features at Montalvo such as its Garden Gazebo and the archways of the Historic Villa, as well as Montalvo's lush gardens and historic and contemporary focus on edible gardening practices. The structure is comprised of backyard patio awning material and fencing supporting the growth of peas, beans, yellow squash, tomatoes, and other delicious plantings. The interior of the tent houses a publicly accessible swing and features a soundtrack that layers human and bird pickup lines, mating calls and songs. As a tribute to the contemporary urban farming movement currently sweeping the nation, an oversized urban farmer located atop the 15 foot structure will wear the Dress Tent periodically and activate the project by performing minimal gestures of plant cultivation.

Each dress tent in our Dress Tents series speaks to a sense of place and playfully challenges a female fantasy or myth. Edible Dress Tent is a tribute to the formal gardens situated on Montalvo’s grounds and the contemporary urban farming movement sweeping the nation. Each piece of wearable architecture in our Dress Tents series blends fashion, architecture, performance art and photography. In this dress tent, the fashion alludes to sexy farmer’s overalls and the architecture of the dress tent is reminiscent of the garden gazebo. The iconic archways of Villa Montalvo are also drawn upon as inspiration.

Edible Dress Tent serves as an intimate summer retreat. Her dress tent “awning” provides shelter from the hot sun and her vines supply edible delights for artist resident’s salads. Her dress also functions as an attractor for local birds and butterflies. Foods, pollens, scents, and flowers become elements of allure, beckoning humans and animals alike. The interior of the dress tent is a listening station, which further highlights animal and human attraction through a soundtrack that layers human and bird pickup lines, mating calls and songs. The dress tent is a conflation of backyard garden, fashion and architecture. It is also a social sculpture, a habitat for meditation on the interdependent nature of desire as experienced at Montalvo. The formal gardens and grounds are filled with the romance of visiting artists, newlyweds, nature lovers, and the birds and the bees.