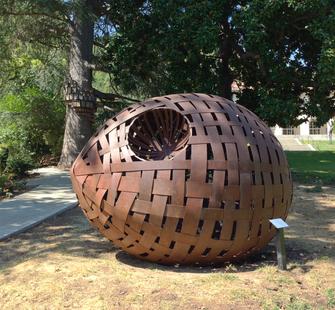 Funded in part by Applied Materials Excellence in the Arts Grants, a program of Silicon Valley Creates.

California artist Ann Weber transforms the ordinary medium of cardboard into impressive large-scale sculptures reminiscent of pods, gourds and organic spires. "O California, best beloved land" was created during her Montalvo residency in 2010 and donated to be auctioned at our annual fundraising gala that fall. The auctioned piece was then returned to Montalvo to remain on display. In 2011, Weber restored the piece using stainless steel in place of the cardboard, which was beginning to disintegrate from the weather.

Named after a quote from Senator James Phelan, the piece stands as an ode to the beauty of Montalvo.